Today, I needed some Emery cloth.  To clean the rust off my old Champion No. 2 high speed drill which I gave my No. 1 son, but he never bothered with it and it rusted in his large damp shed.  He brought it back and left it with me and I can't just leave it.
Having a clear up in my shed last week I found a tin with canal stuff in it from 2003 when we first moved afloat.  Amongst all the stuff was a leaflet for a company locally, called ESP Marketing. When Chris checked the address on the 'net she found it still exists and is in fact, in the same building as Ketts Autopaints, of whom I am a regular customer and have been for years.
So, in to Ketts to get Emery cloth and I'm told that they don't do it (!!), but "the old geezer next door does" at which they bellow for Dave.
A decidedly ambulatory unstable old fella came in the connecting door twixt units, but immediately struck me as a man who knew finishes.  Not, alas, the nitrocellulose wood finishes on his old leaflet, but paint generally and all things painty.  Resisting his constant adverts for acrylic muck and water based anything, I asked for the Emery cloth.  Now, most places charge 50p a sheet for ordinary old wet 'n'dry by the sheet and heaven knows what for Emery, but Dave sold me four sheets at 50p each....for Emery!  Then happened to mention tiny brushes.  0 and double 0 AND pure sable.  He had cards of them......a quid a pop.  Come on!  These are at least 3-50 in art shops!
By a very spooky chance, today was the last day ESP Marketing officially exists.  Tomorrow all that stuff will be Ketts.
If you want Emery or tiny sable brushes in the Fenland area, hie thee over to Ketts in Algores Way, Wisbech and have a word with Dave.  Soon, Ketts will find the supplier's invoice and you will NOT be able to get Emery for 50p a sheet or a sable 00 brush for a quid!!

Dave will be there for another 6 months for advice, than he understandably retires.  I wish him well.
Posted by Odds at 12:17 No comments: 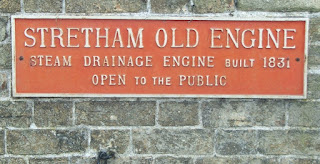 Thinking that maybe nicely made steam engines might be a hobby and liking stationary engines, I dragged Chris off to Stretham Old Engine, in the wilds of the Fens this afternoon.  It has been a gorgeous Spring day today (make the most of it!!)

So, finding no brown signs, but a single hand made one on a fence at the end of the High Street we just about found our way to the engine house.  An old pumping station in fact.  I believe I was last there in about 1977 when I visited it by boat with friends.
I suppose things must have changed since then, but it would be difficult to be specific.  The little leaflet that I still have somewhere is the same, but on different coloured card.  They have opened up a couple more buildings in which is the engine I actually went to measure, an 1829 Guinness vertical engine with architectural features.  Very pretty.  I might have a bash at that. 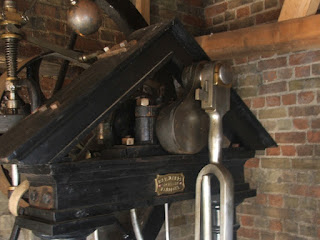 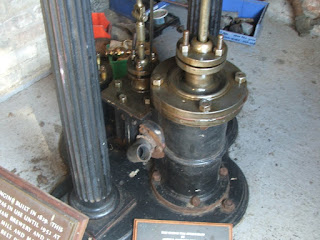 Then they have got the diesel that replaced the beam engine on display.  I'm not sure if it runs, but looks like it might.  It's a huge 4 cylinder Mirrlees, which drives, or drove, a centrifugal pump.  Each valve rocker is bigger than a Mini's cylinder head! 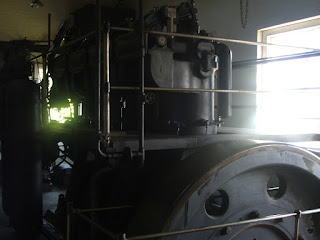 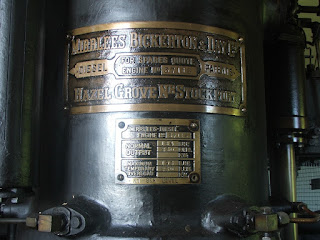 The old beam engine....well, that is just so huge that you can't take it in, much less consider it for modelmaking.  You can't see it all at a glance.  In fact you can't see it all in maybe 6 glances.  It is difficult to even see how it works as you must revolve your head, eyes, your whole being through more degrees than you can count to take it all in.  The valve rod has an eccentric sheeve that would quite easilly pass over my ample figure and goes off about 20 feet, out of sight, to a valve somewhere.  The "rod" is actually a girder-like structure that would support that cylinder head-less Mini.  To see the top of the cylinder requires that you climb TWO flights of stairs.  Then to see the beam another long flight takes you to the Beam Loft, in which are displayed some original wooden patterns for the engine's castings, but only the tiny bits.  Frankly, I could find nothing that tiny.  I'm talking at least a square foot of old wood, full of worm and nothing that small could be found on the engine itself.  Maybe they were for some other engine, but no mud-caked Fenny had bothered to ask.
Despite the enormous 24 foot diameter of the flywheel, it seemed strangely lightweight construction, having just 1 inch rods as spokes, cast into the rim.  The crank, by contrast, is vast.  5 feet long, by over 2 foot diameter and fully 12 inches thick! 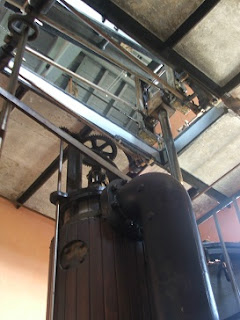 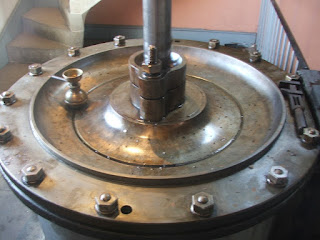 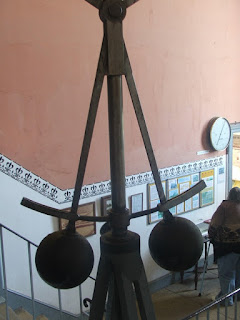 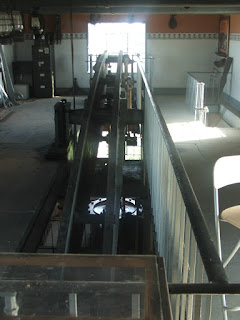 All this vast, but strangely airey construction drives not a pump as such, but a massive scoop wheel.  39 feet in diameter and able to lift 30 tons of water per revolution, it does 4 revs a minute.  It is made half of iron, half of wood. It was installed last in 1830 and can still be used if necessary. 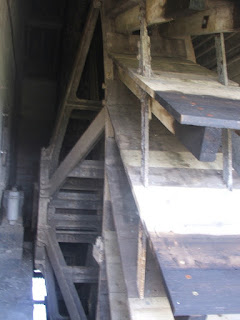 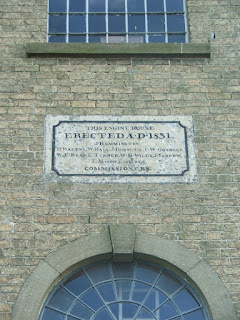 I realise that it has all been done by volunteers, but it was a bit down at heel and very poorly lit.  I suppose there isn't the trade to warrant a tea shop, though that would have been nice on such a day.
An entrance fee of £3 wasn't too bad, but then there ain't that much to see to be honest and there was no easy place to park!  But it was a pleasant hour or so on what has been effectively the first day of Spring proper.

As a friend said, this morning.
Well, yes, but why say anything when you can't think of anything TO say?

My 7 year old grandson apparently told his Mum yesterday that he felt "hungry, bored and empty inside"!
Well I know what he means.

Since losing my old cars because the Landlady insisted I get rid of the old caravans in which I stored stuff, I have, effectively, lost my hobby.  I have always had an absorbing hobby of some sort, but no more.  Modelmaking, I now realise, is too much like work, indeed mainly IS work, but now I am retired and pensioned and am not allowed to work because of said pension, I have no idea what to do with myself.  I used to maintain an interest in models as a hobby by sneaking odd hours in on some NON work based project that I had going round the old brain box, but now, there is nothing in the old ain box.  Tomorrow I shall take back all the model aircraft that my old friend, Pete has given me.  This is becauseI can't justify the cost of model aircraft club membership, insurance, fuel, etc.  And it's always blowing a wind round here, so I can't try anything out on the farmer's field.
I can't take his models and do nothing with them or worse still, sell them, so they must go back to him.  Engines must be sold as they're no damned good sitting on a shelf.

I have the Marblehead yacht for better weather, once it's done, but it's too big for my car, so will need son or son-in-law to cart it about.  I have smaller power boat models, but that kind of model boat bores me in 5 minutes!

I have slot cars, but that's pretty much all I've done for work in the last 3 years.

I have model railway dioramas.  I have toy steam.  I have inshore model fishing boats in 1/48th scale.
Do any blow my frock right up currently?  No.

So, that's where we are at the moment.  If the blog kind of dies out, you'll know why.  I guess....it happens.  As does the inability of this bloody machine to allow me to type and correct normally when it feels like it, so apologies for the typos.
Posted by Odds at 13:30 13 comments: