It has only just occurred to me that a good place to ask about our chum Iain Robinson would be right here, where he had commented so valuably.
We all know by now, no doubt, that his blog has been removed. I asked him by email if all was well and have had no reply, so if anyone has any idea what has happened to Iain, please let us know by commenting.
Posted by Odds at 06:45 17 comments:

.....feel the width, as they say.  Well the width of my wife's Pashley Picador Plus trike is certainly there. It wouldn't go through the gate, but the quality is shite.  No messing now, call a spade a spade...shite!
A make considered lazily by us all as a "Best of British" had the kind of paint on the mudguards that you would have expected from a just post War Beetle.  I couldn't understand why there were such rust bubbles on the mudguards, until I gave it a poke with a screwdriver and a four inch plate of thin cellulose just fell off.  No primer!!  Where the hell is the quality in that?  For some odd reason, one mudguard has a white primer on the outer surface, but none where the rain gets splashed inside and the other two have no primer at all.  I have a feeling the chain guard is a similar disgrace.

I find that appalling.  The construction of the mudguards is nowt special either.  Something with turned over edges, for strength, needs to be dipped to make sure the paint gets in there.  Ha! No chance.  If this thing just came off the slow boat from China I wouldn't be surprised.  They are £745 new!  I wouldn't pay a fraction of that.  Ok, I didn't anyway and I want to sell it well, so I will file the crap off the mudguards, sand, spray with self-etch primer and then spray with black enamel.
I'll show bloody Pashley what quality is!

Everybody loves a mock up...

Work has gone well with the Vanity model.

It started today with a desire to see the water line on it with tape, so that I can take it over to my son's garden pond and see just how much weight I have to put in her to make her float on her marks.
So, while I was at it, I thought I'd attach with more tape the spars to get an idea how big it all was.
Allowing that the mast is maybe not fully seated by a few inches and that the boom needs to be shortened a couple of inches,.....it's big!  That's a full sized door it's up against. 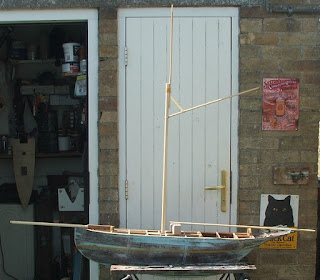