Finding model flying to be too expensive and too seasonal in a country where half the year is winter,
I have tentatively returned to model boats, with which I have always dabbled.

Some time ago, my dear, late friend, Ken Cooper, gave me a lovely old Marblehead yacht.  He'd found it in a loft of a big house once lived in by Tommy Sopwith, aviator and sailor of the English America's Cup yacht that came closest to beating the Yanks.  Ken had put a nice laid deck on it and hatches. He'd also clearly intended it for radio control as there was a typical modern tiller arm on the rudder post.
I had intended running it as a Braine steered model a la its pre-War roots, but, realistically, it would never get sailed as I have no access to a lake round all of which I can walk and free sailing demands such a pond.  So, with apologies to Tommy Sopwith and the traditionalists of Marblehead racing, I shall fit the boat out with R/C, ensuring I can get it back from the reeds, by never going near them. 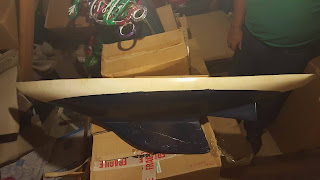 The lovely lines of a Pre-War Marblehead.  50" long and 800 square inches of sail area. 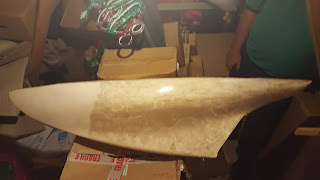 Much more recently, I was given a bare, very early GRP yacht hull.  My old chum, Peter, had it under piles of junk where it had been for maybe 40 years.  All he knew was that it had been modelled on a design by Uffa Fox, the famous yacht and dinghy designer, but I could find no evidence of such.
But this week I placed pictures of both models on the sailing section of the American based R/C Groups forum and in no time received the news that the early GRP hull was a 1/12th scale model of the famous Dorade Ocean Racer and that the Marblehead was a "halfway" point 'twixt Madcap and Pocahontas, 2 very competitive designs of M boat.  The Dorade won its first race in 1931 and is still winning against fleets of much newer boats. Even in 2013 it won the Trans Pacific race outright! The Uffa Fox link was that her lines drawing had appeared in a famous book by Uffa Fox, but she had been designed by the equally famous Olin Stephens.

So, Super 60 fuselages were hung up in my son's loft and the 2 boats brought home from their overstay up there.  As I left, he gave me the mast for the Marblehead.  It just about fitted in my car.  Indeed, I have no idea how these boats will ever get transported anywhere when the deck fittings are all on and the masts fully rigged.  Peugeot 206CCs are small!
I have a huge collection of electric motors, so I will be using one to make a sail winch for each boat. I see no point in spending a fortune on a sail winch servo when a geared motor and a drum can be made so easily.
Rigging?  Haven't got a clue, so a cheap book on the topic is on its way to me as I type.