We now shop at Tesco's. Mainly because Morrisons had started going low on stock which is just laziness.
So, much as I despise Tesco as an organisation, it is the only place that has all we want, although we still check out the very well priced Lidl's every so often.

One thing that Tesco have here, which nobody else does (thank Christ) is a 24 hour gym up one end. This means that having ridden up either the travelator thingy or, as increasingly, the lift, because OTIS can't make a reliable travelator, you end up only feet away from the gym's entrance, where (usually) brutally ugly women stand around as if mesmerised by the light or noise or something, invariably staring at a mobile 'phone, having shoehorned their lumpy limbs into the most unsuitable, but equally ugly hosiery and wearing the kind of tops that leave their cellulite ridden flabby stomachs exposed to the vomit that I always wish I could project onto them.
I suppose there is some achievement in carting around the exercise machines the extra weight of eyelashes that would propel a small boat across the Atlantic if the rower lost his oars.  Make up so heavily and insensibly caked on that they appear to be mutated dolls from a singularly incompetent workshop.  Eyebrows that Graucho Marx would have been proud of and lipstick that looks like they've just eaten a Ferrari.
With all the exercise, they still have backsides like picnic tables and knock knees, bottomed off with pigeon toed feet that must catch on each other as they walk.  Why do these stupid females spend their precious time and money trying to look better when they are ALL hideous!?

Their shopping list will, of course, be on their mobile 'phone, so that they can stumble round the rest of the store staring at it, in the unlikely event that anyone will have sent them a message of any import whatsoever.  But they live in hope and so stare at the stupid contraption in case some misguided fool thinks them at all important or worthy of attention., thereby bumping into displays and people who are sufficiently well organised to have a small piece of paper between two fingers of the hand that pushes the trolley, containing all their needs for the expedition.

The younger men all wanna-be hipsters. struggle round in jeans so tight, their balls have all but withered away, but their knees will be free to open air being stylishly cut at the factory by Chinese children who are paid specially for that particular and peculiar skill.
They will have visited the barber's shop which is squeezed incongruously along the vestibule of anger where we jostle twixt non working Otis travelator and lifts. In there, grown men have the kinds of hairdos that as small boys I and my friends were already grown up enough to fight against. The short back and sides which was all the carve up merchant at Austin's barbers could ever do. Now...it's considered a special skill. It's what my Grandfather called a "tuppeny all-off"  "All ponsed up like a pox doctor's clerk" he would smirk at the merest whiff of hair oil or male grooming.  It's what I laugh at and call a Tesco's hairdo.  They're like droids in a row, as are the snip joint wallers doing it to them. Clones, sheep...Baaaaahhh!

Well, I have now finished the Vanwall Transporter master. Just have the glazing bar masters to do in brass for a white metal casting. Trouble is, Eileen's Emporium have been super tardy in their deliveries so I was forced to soften and hammer 1/16th" rod into flat strip. 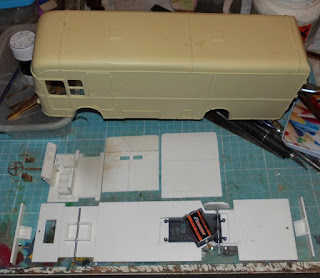 For some reason the guy wanted it to be motorisable for slot tracks rather than just scenery, so I had to make a chassis pattern to take the inevitable Slotit pod. All this does is weakens the chassis which I could so easily have designed to be strong without having to use the silly, over-rated, overpriced pod.

Then we have the 1915 Triumph Model H in 1/43rd scale as model railway scenery. All in brass and fiddly as Hell to do.  I'm now doing the riders for it. One, standing in uniform and one seated on it as a civvy chap with his cap back to front. 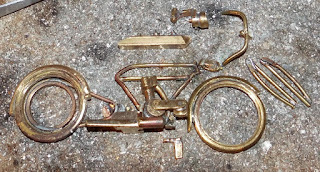 And the Vincent, subject of other posts?  Well, I sent the deeper parts that our normal caster couldn't mould to a company in Birmingham called Griffin Moulds who assured me it was all just normal work. After longer than they promised they sent me, without any communication of any kind, a bag of dust that had been the engine casings!  They had utterly destroyed the masters and made a shit job of casting the other bits. The wheel rims they claimed were a "perfectly normal casting job" weren't even round and half the spoke bumps were missing.
So, after Christmas now, I will have to remake the engine casings in brass this time to get a caster with the right moulds to do the work.

That's it for now, folks. I wish you all a Merry Christmas and a Happy New Year.