When one is used to working for oneself, long hours and all the rest, one rarely gets a chance for an annual holiday.
And it occurred to me that now I am retired I don't have to think that way any more, so I decided to push my me time on weekends rule to a full week, maybe even more.

With that in mind,  I have got the 54 year old Aerokits Crash Tender out of my son's loft and determined to finish it, once and for all. Yes, I had a 54 year old model which I had never actually finished!  I'd used it, often as a kid, but just never put all the final bits on it.  In fact, somehow, it had lost odd bits of itself.
There has had to be an element of restoration as time has had its usual effects on even good quality plywood and a few areas needed gluing to correct small bits of  delamination, but generally it just needed finishing, rather than re-finishing. 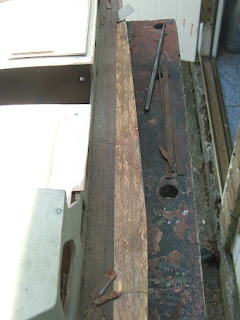 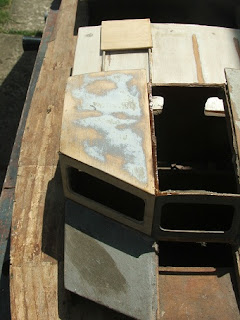 I first had to clean the muck of ages out of it with a pointy stick, a stiff brush and a Hoover with a clever micro tubes attachment on it.  Then an all over go with epoxy resin which behaved itself beautifully despite its age.  This would have strengthened it up internally and helped waterproof externally.  The epoxy was filed and scraped down and then painted several coats with a thick cellulose primer and rubbed back.  That is now ready for a spray coat to get a nice finish.  I had noticed that round the bottom of the cabin sides there was a batten to aid waterproofing on the real boat so that was added, as was the toe rail on the deck, the dummy door framing and the rubbing strake round the hull were also put on with another hatch and runners on the middle of the wheelhouse roof. 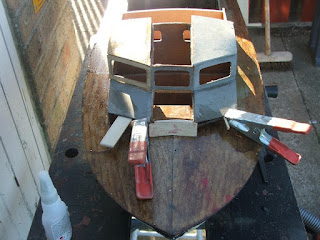 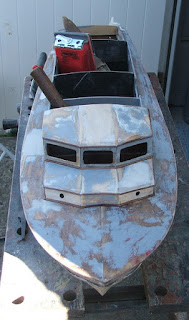 I am currently making the window frames and gutters for the windows.  The mast has been made from brass.

I will be using the original Taycol Supermarine motor, because it is only right and proper. I would have insisted on using the  original REP radio gear, but some bastard stole it years ago, so I will use a modern one that doesn't risk being interfered with by the radio frequency "dirtyness" of the old motor.  I'd hate to lose this old girl.

For annual leave, this has proved well worth the effort.