From the village pump...

Where I now live is a village where Thomas the Tank Engine was born, albeit in better days. Thomas was an offshoot of the earlier Toby the Tram engine.  Toby used to trundle up to 40 full fruit vans along the rails at the top of my road. I could even have seen it from my garden at a squeeze.

The Rev. W. Awdry, teller of the above tales,was the village rector.  Most of the other inhabitants are the village RectUM.  Chavs, under class, pond life of various degrees who think nothing of tumbling down from their perches dressed in pyjamas and dressing gowns, in big Bird Boxes.  You know, those Boxes on wheels that birds drive. I believe the manufacturers like you to call them SUVs.  Nothing else is even advertised these days.  And the ghastly, over-weight, ugly, slack jawed, knuckle dragging, aggressive, fishwife-mouthed dregs who infest this village all drive one.  Deciding which bedware to take their spawn to school in the morning, they leave their fat little sprogs in front of the telly, possibly watching the latest iteration of Thomas that Disney wants them to see, in order to keep them quiet until they shoo them off to school in those same Bird boxes, where they park in such a way that the bus can't get through that part of the village, even though the lazy sluts could easily walk the offspring so short a distance and do themselves some good into the bargain.

Thank God we live on the very edge of the village and only occasionally have to venture into the centre to buy essentials or use the Post Office.  Fortunately by the time I go to the Chinese Takeaway, most are gone, watching their favourite crap on the TV.  I have lived in other villages and know many more, all were very pleasant, but this one takes the biscuit. Thank heavens we can shut our front door and ignore that Chav Central exists just down the road.
Posted by Odds at 06:22 6 comments:

I apologise to my tens of followers for the long gap in blog updates.  I've been busy with the Vincent motorbike master and slot cars.  Yes, my huge collection of body shells for which I made the patterns going back years.  So, I joined various Facebook pages concerning slot cars and found them all to be so very friendly and helpful. OK, I was helped by one or two in the railway world, but I couldn't take all the kit snobs. The daft sods prepared to spend a King's ransom only to end up with the same pile of bits that anybody else could have.  THEN spend the same again on the extras like wheels, gears, motor, paint, decals, weathering, und, und, und....I hate all that nonsense.  And the fact that scenery still hasn't scored more than 3 out of ten on the necessity score chart.  Laser cut buildings costing a fortune, yet looking like they came off a robot with their horrible regularity and miss-matched corners.
Nope, life, I have finally discovered, is too damned short to have some old fart's better pension rubbed in my face, followed by their comfortably fat arse in the ticket queue at some cloned exhibition where the kit envy and kit snobbery reach spoken fever pitch and those who have wrangled online can finally insult each other face to face.

I decided that I actually rather enjoyed not merely making model car patterns, but moreso restoring some old Revell slot cars that a good friend kindly gave me for my last birthday.  I lapped up piecing bits of styrene and Milliput filler putty into previously chewed out wheel arches.  I loved that people on the pages would offer their spare bits to the project.  Getting it all primed and painted and decalled up looking pristine again.  And I don't even have a track!  Or a local club.  Doesn't matter. I now have a fleet of 50 year old model cars that still go like the clappers but look better than new.  Then I was given a spare Stingray body so I'm turning that into a Gran Sport, a rare version of the Corvette that was parked next to us in the paddock at the Goodwood Revival.  Boy were they LOUD. 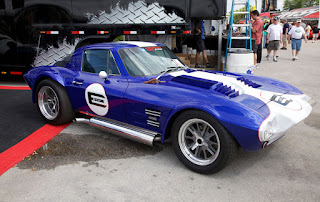 I have a spare GTO body too, so that will become Sir Stirling Moss's lime green version, with lots of detail and probably a home made chassis from brass, or maybe the one my son has 3D printed for me on his machine.
Then it seemed to me that I ought to have the cars I had as a kid all those years ago.  I now had the Revells with their revolutionary "can" motors, so how about the Scalextric vintage Bentley and Alfa Romeo, the Airfix Lotus for which I'd paid 13/10d.  Or the gorgeous 1964 GTO that Monogram made and then licenced to MRRC, my favourite make.  Asking around the pages I found a GTO, a complete kit sent to me by a friend and a spare body he wanted me to modify into a different version for him.  A cheap Bill Thomas Cheetah came from Spain, another MRRC body.  That's gone on an ancient Supershells chassis courtesy of Tony Condon, who wrote the history of slot racing a few years ago and recently bought the entire stocks of SRM/Supershells.  The wheel inserts and tyres came for that today  Guess what I'm doing tomorrow.

And I got that Airfix Lotus.  2 to be precise, in immaculate original sets for a great price locally.  So now, all I'm lacking is the MRRC vacuum formed Stingray body to put on my VIP Club Special chassis. That will leave just a Microperm motor which I built into a carved balsa wood Ferrari 158 in 1965 and won a big F1 open meeting against adult opposition at Runnymede.

I have quite a past in model railways, yes, but they're all dead or gone and it counts for very little now, but when the oldest friend you have (we met on the first day we ever went to school), Steve, goes to the trouble of contacting you via PMs on a slot car forum after 46 years AND makes the effort to meet up and have a drink and a chat, I think my days in slot racing are more important, so, I shall flog off what railway stuff I have that is saleable and my R/C gear which belongs to a now unaffordable hobby and I  will spend it on wheels and tyres, guides and gears.
All the huts and sheds I've made for model railways can be put on my son's 1/43rd scale hillclimb track pretending to be Marshalls huts and paddock cafes and I will build a track on one of his spare doors, hinged to the wall of my workshop.  One day there may be a club in this area like there used to be. 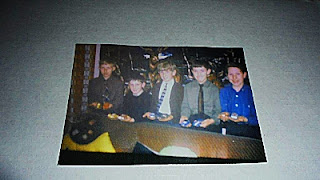 Me, second from right with that Corvette vac-form.  Steve (Uncle Albert on here) far left.  Note the ties, folks.  Around 1964.