In search of a decent club...

Well, I got fed up with being treated like a piece of shit on Betts's foot for absolutely no reason and when he started spouting BMFA rules at me when I raised a point on the club's facebook page I lost it and, calling him a rule-loving arse licker publicly, sort of ensured I would not be welcome back at Station Meadow, Haha!

So, I went to Downham club, where I'd been going a few times a year for a look and a natter for, believe it or not, over 30 years, but had never joined as I was told they were very expensive. It actually turned out they're a few quid cheaper than Emneth. I was told there'd be no objection to my joining, especially as I was yet another refugee from Emneth (they had a few already, all quoting problems with Betts/Ball).  But when I went back 3 days later, the geezer who runs the club (damned near owns it!), John Langridge told me he'd called the BMFA and they'd said not to allow new members till the new year. Now, that is not in their power to say and John wouldn't use his precious pennies to call the BMFA to save his life. In fact, he just didn't want me to join because he was jealous of my friendship with his co-founder. But Peter had developed dementia and I'd been asked not to visit as it might upset him. This ban has been like a death for me as Pete and I shared a passion for the hobby and I just wanted him to know I'd finally taken up the hobby.  When I learned that John had been visiting I realised he was behind my ban. Unlike him I am not after all Peter's wonderful models. I'd have nowhere to put any of them anyway. They're all big ones.

However, while I sat chatting to other members of the Downham club, without Langridge, I was told of a small club in the Thetford Forest.  I found the club online, 'phoned their Secretary and was given such a superb welcome I went over there, with my wife and our wee doggy and paid them a visit.  Well, what a fantastic place and what a wonderful welcome from Secretary and Chairman.  They made my wife just as welcome and if our dog were friendlier they'd have welcomed her too!

They have electric, I.C. fixed wing, helicopters and even FPV and drones. In fact the secretary is a licenced drone pilot for aerial photography (now so much used in TV).  They even have a 4 foot concrete patch in middle of the field for helicopters to take off and land.  The site is surrounded by huge trees on three sides, a river behind and a railway line in front, all topped off by a small chicken shit-powered power station to one side. Basically, if you can fly there you can fly anywhere.  The club are in the process of buying the site, but they have to retain access to the public on the footpaths that run round it.  But that's not really a problem. The public tend to stop and watch and ask questions.  Naturally I joined immediately, paying their incredibly low subs sum, itself halved as I was joining over half the year through  and I have now flown with the instructor three times on the club's Bixler trainer, even getting as far as looping and landing last time up, despite the cross wind.  Then the weather broke and I've not been back for three weeks, but Sunday next is forecast as good weather.  We must see whether Boris shoves us all back in lockdown for November, as is thought likely. 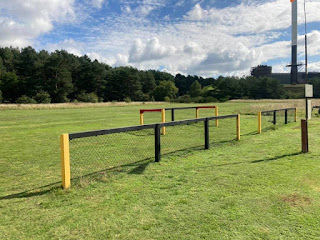 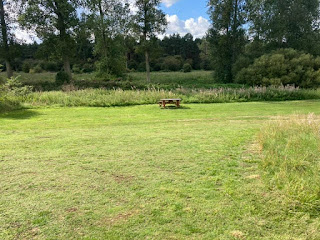 Yes, that's a tall chimney on the extreme right of the top photo. It's a good way off, but a chap hit it with his large stunt 'plane last time I was there and never found the front half of the model.
The lower picture is where we all park and behind that is the river. Fast flowing alas, but somebody did once get a floatplane off it!  Couldn't get back on though!