Regular readers will know I'm a huge fan of the work of Gordon and Maggie Gravett.  Apart from his books, of which I have a couple, Gordon is a delightful guy to have a chat with, which I did when he was displaying Ditchling Green at the Spalding show a few years ago.  He has Austin 7s made from kits for which I did the masters on the layout, so that was a good ice breaker.
Their latest layout (the French Pempoul was in between and I didn't care for it much, being French) is known as Arun Quay and is a beautifully observed depiction of an East Sussex estuary quayside and it's little locos and stock.  In 31.2mm gauge (I don't begin to understand why) it still looks very finely made.  The buildings, as ever, are superb. Sussex flint perfectly depicted.  Small stores and workshops only. Nothing flash or big.
But for me, the really clever bit is suggesting the river by painting it at the back of the narrow board and merely suggesting it with a railing and a very quayside type of building. Not for Gordon the obvious and usually ill portrayed wharfside splash of fake water with an even less well modelled boat. 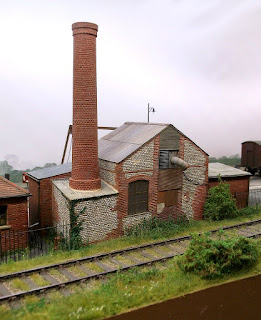 Just check that brickwork.  Gordon uses the very longwinded method of covering a core with Das clay and then engraving the bricks in to the surface. 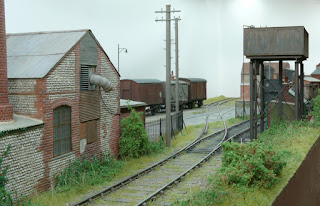 Alas, I don't have a scanner, so can find no more pictures than these on the net that will open.
Everything done to one high standard.  Anyone can do this with sufficient care. But very few bother.

Now, thanks to the blog's very good friend, Frank who is a magician with these machines has found a way of sending me the Flikr pics.  These are from Phil Parker, btw, another model railway blogger.
Here is the one I really wanted to show.

That small office and the railing next to it just scream "riverside" at us and the old boy fishing, leaning on the railing is perfect.  Apparently his old overcoat is modelled in Milliput with a belt from the foil of a wine bottle cap.  Proper modelmaking. 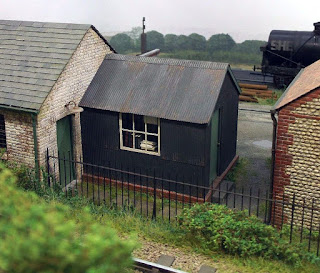 Perfect observation of the little black shed.  And a really delicate railing.
Railways might be the excuse for this kind of scenery, but it's barely necessary to have such a wonderful set-piece.