Your Natural History will change...

Said the very strange doctor standing at the end of my hospital bed.
He had the thick set dark look of an Egyptian souk dweller.  His large belly clothed in a heavy check shirt was supported by a huge, thick, immensely old leather belt, which had not a single waistband loop to help it in its duties.  He had all the appearance of a Sudanese railwayman, so that's what he became to not just me, who has a problem catching foreign doctors' names, but the rest of the ward and even some of the nurses.

I had suffered a heart attack at 2-30 am on Boxing Day and here I was in hospital facing the trip to a larger hospital to have an angioplasty.  The Sudanese train driver was my referral doctor. I had seen so many, all of whom asked the same questions and assured me they were the one who would be looking after me and all of whom I never saw a second time!

Eventually, an Indian doctor came to see me in the larger hospital, explained the dangers of the procedure, got my signature and left, BUT, he was in green scrubs. HE looked like he meant business. HE chatted about modelmaking.  And HE it was, who explained it all to me as he poked a wire up my right arm, painlessly, swiftly and surely.  I was awake the whole time and was so comfy on the firm but compliant slab of foam that I nearly nodded off, but I then realised they'd been playing country rock on the music machine in this tiny ops. theatre.  Country rock for Christ's sake!  I complained and the doctor laughed out loud and told me to bring my own fucking music next time. Touche, Mr. Krishnam.  And thanks.

Later that afternoon, as the crew from the little ops. theatre came into the ward to prepare for a good night out, he came in to have a long chat about modelmaking, slot cars, craftsmanship and a lot besides.

My friends who assured me that the procedure was painless were instrumental in my putting  my signature to the permission form.  I was too scared before that.  You know who you are and thanks, as ever.

I should say that I had not stayed in a hospital since I was about 9 or 10, an experience I have chosen to forget. Ever since, I have hated being in or even near a hospital, something I have only done, reluctantly, in the role of visitor.
Yet my experience in adulthood for the first time, of staying, nearly a week in not one but two hospitals could not have been better.  The friendliness, helpfulness and professionalism of every level of staff, from cleaners  through orderlies and auxilliaries to nurses, staff nurses and doctors was astonishing.  They must be hard wired to do these jobs so well, so reassuringly.  Nobody could could keep the act going otherwise.

Superb service, lovely home cooked food, oodles of tea and other drinks throughout the day. The right medications at exactly the right times of day, blood pressure and sugars taken every hour if necessary.  Saline drips, heart monitoring, bed remaking, the friendly Norfolk sing-song of "aah yoroite, mah daalin'"?
Astonishing.
And all for free.  We British don't know what we have, really. 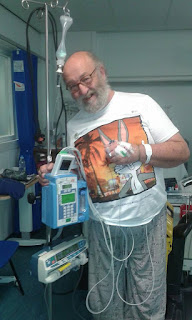 Meet Monica the Monitor.  The transport of this entire rig was necessary for me to just spend a penny!